For those not aware, I have dropped Kris Kobach from my lawsuit at his request.  He claims that he has no jurisdiction over these records.  So, turns out we don’t  need his permission nor does his objection have any bearing on the case.

He had a few questions for me about the details of the information I want and my previous efforts to obtain it.  I had filed for a recount in a timely manner after the Nov. 2014 election.  I was denied access to the records I am seeking in this lawsuit.  Specifically, Ms. Gritz wrote me on Nov 13th, 2014:

“Your request for a recount does not entitle you to an “audit” of the RTAL tapes, as they are and were not used in the tabulation of votes.  A recount is simply repeating the process that produced the original election results in order to determine if the ballots were counted and the totals tabulated correctly.  The use of such tapes would not re-create the actual tabulation process as conducted on November 4, as Sedgwick County did not and does not use or rely on the RTAL tapes for tabulation. “

I had a few questions for him.  What responsibilities does the county election office have regarding public meetings and public preferences on the recommendations for the purchase of new voting systems?  His answer was succinct: None.  Disappointing but good to know I suppose.

But Ms. Gritz, deputy elections commissioner, was more encouraging.  I was picking up some records from her office earlier today (copies of the registration books for a voting station from last November’s election) and she mentioned my interest regarding the RFP.  There will be a public demonstration of the vendors with the county commissioners in attendance for the RFP.  She’ll email me when it is arranged.  I’ll plan on showing up.  Anybody else interested?

My lawyer asked me two questions:

If I could only audit one precinct* which one would it be?  I tried to emphasize that any randomly chosen voting station would do.  He pressed me for a specific one.  I chose Countryside on impulse because it was my polling station.

I have since dithered over my answer. I worked there during the Nov 2014 election, showing up before the polls opened and not leaving again until after the machinery had finished all of its computations and printing.   I know for a fact that an audit will not show a 100% agreement because I personally reported one machine problem (tape not moving forward). That machine was taken out of operation until it was repaired.   At least a few – perhaps several – votes were not recorded legibly as a result.  An audit will only reveal how many votes were illegible.

And voter privacy might be an issue with that choice, as I was there.  But it seems to me it would be less of an issue that the simple lack of voter privacy in the way the machines were set up.  The privacy screens were a joke as we walked back and forth escorting other voters to an open machine.

In the end, I don’t know if it would be better to select a different station for either of those reasons, but the impulse that led me to name Countryside was authentic.  If I could only do one, that was my first choice.  If they are concerned about privacy, they can personally input the seed value for a randomly selected station.

Am I now or have I ever been a registered Democrat?  No.  I was registered Republican for more than two decades.  After I moved to my current home (1985) and subsequently voted in a primary, I was registered that way.  I resigned from that party after they shut down the government in 2013.  That was the last straw. I was no longer willing to tolerate and remain associated with the party, even if it was in name only.  I was a R.I.N.O. long before the name was articulated.  I liked it and embraced that name.  I always imagined a purple rhino as the symbol for R.I.N.O.’s.

I do not understand the repercussions of the different answers to the second question.  I assume that there are assumptions made with respect to that but I don’t even know what would be considered the obvious choice.  I’ve spent my life up until now avoiding politics because I am so bad at storing and accessing that sort of information in my head.   I get the impression that if I had been a registered democrat, it would somehow reduce my chances of success.  Why would that would have an impact?  Democrat, Republican, it doesn’t matter.  We all want our votes counted accurately.  Could any of my readers enlighten me?

I expect access to these records to be arranged to keep the chain of custody of these records secure.  I expect it to be expensive for that reason.  My lawyer tells me that we can ask about the costs of various aspects of conducting an audit and get estimates of the costs involved during the deposition.

Although I feel strongly that any citizen should be able to request permission and perform an audit if they are willing to pay the costs involved, I established with my lawsuit in 2013 that that is not the case.  This time, I’m hoping that my credentials and a desire to produce scholarly work as a result shall be sufficient to grant my request for access.

*One voting station actually. A voting station, not a precinct, is the smallest sampling unit possible. Does anyone else care about these technical details?

Statistician Beth Clarkson has been in the news about her efforts to audit Sedgwick County voting machine tapes from the 2014 election. She presented a series of questionable statistical voting patterns linked with electronic voting machines at today’s K-State Salina Polytechnic’s Civic Luncheon.

“It’s morally wrong to have proprietary software running our elections,” Clarkson said. “You can’t do that and have a democracy. This isn’t even a partisan matter; it’s a matter of not being transparent and secure.”

Salinans who attended the lecture expressed their support for Clarkson. 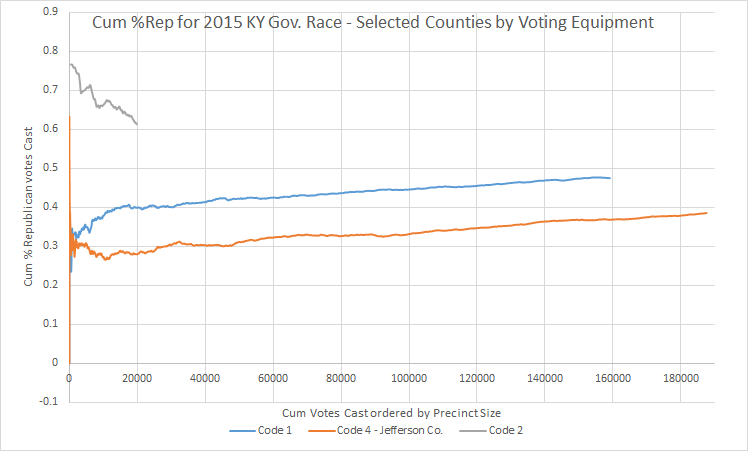 Bev Harris, of BlackBoxVoting.org, who I spoke with earlier today, described the higher vote totals in the down ballot races as a “significant anomaly”. She tells me that, at least until more records are requested and examined, the KY-Gov’s race “has to be looked at as a questionable outcome, particularly because of the discrepancies in the down ballot races. More votes in those races and not at the top…that just doesn’t happen.”