The first thing I noticed, even going into the building, was how crowded it was. There was a lengthy line just to go through security. Many of the people there to attend my hearing that afternoon, some of whom recognized me. I was even offered the opportunity to cut the line. I declined, but it does make me feel like a celebrity! 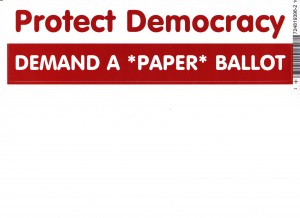 When we got off the elevators, the hallway to the courtroom was already full. People I had never met before gave me buttons that said “Show Me The Votes” and bumper stickers that said “Protect Democracy DEMAND A *PAPER* BALLOT”.

The courtroom was crowded. Even the jury box was full and extra chairs were brought in. Even so, some people were forced to stand. The judge came out and commented that there were more people there than in similar hearings for all of his previous 26 years combined. News reports said over 100 people attended. I even heard there were people outside unable to get into the courtroom.

Judge Lahey started the hearing by detailing my previous court actions of the case. I had been representing myself and filed the lawsuit based on the denial of an open records request. Prior to filing the lawsuit, I had requested a recount of all the ballot questions (only candidates can file a recount request for races), within the required time frame, and had been denied. I then filed the open records request which was also denied.

My lawyer shifted the basis for my lawsuit from an open records request to a recount request. In Kansas, ballots are specifically exempted from open records requests and these records were ruled to be ballots in the 2013 case I lost. Kansas law also states that the person requesting the recount is allowed to specify both the precincts they want recounted and the method of recounting.

Note: Some readers have requested I post the motions. I only have paper copies and they are rather lengthy for me to scan one page at a time on my home printer. My lawyer has graciously offered the use of his automatic scanning machine to create those files, so I will post them when I get that done next week.

The judge stated felt there were only two relevant and controverted facts, #20 & 22. Both were ‘facts’ claimed by the plaintiff in the motion for dismissal: