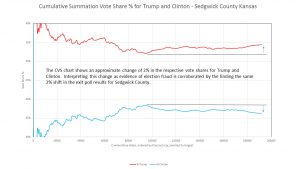 We ran a total of five exit polls Tuesday, three in Wichita.  We were outside, so we were hoping for fair weather.  Although the morning started out damp and dreary, it was nice most of the day, albeit a bit chilly after dark.  Setting up to be operating at 6:00 and running until the close of polls made for an exhausting day although I managed a nap in the early afternoon.  Everything went fairly smoothly at all locations.  In SE Wichita, we gave away 10 dozen donuts before 9:00 am with candy after that to bribe voters to talk with us.  I had to make a run for more candy at 4:00, but no major impediments or problems at the S.E. location.

The most interesting thing that happened was regarding a young black woman who had declined to participate in our exit poll.  Later that evening, near to the polls closing, she was back.  Apparently her mama had voted there early that day and filled out our survey.  She had insisted her daughter return to do so. I was delighted!  That young woman has a mama who cares about her and about making her voice heard by voting.  I wanted to thank her and tell her she’s an awesome mom!  But I was too busy handing out survey forms to other voters.  We had excellent participation rates!

I took both Tuesday and Wednesday off work, and was able to spend all day counting ballots Wednesday.  I’m also an experienced survey counter, so I managed to get the 925 surveys organized and counted by the end of the day.

My volunteers are working together to get the other sites counted, but they have other things to do too.  Altogether, we have collected thousands of exit poll surveys.  Counts are continuing even as I write this.  That I want the surveys from each site to have two independent counts doesn’t make the task any easier.

I also need to verify the results we wrote down at the polling stations, but was informed today that they won’t be available until after the canvassing is complete, approximately a week to ten days from now.  I’m glad I asked my site managers to get the totals that night from their polling stations.  I can go ahead and work on my analysis, updating it with any corrections needed when the data is available.  But I’ll hold off publishing the results until I can verify the numbers.

I will share some general stuff from my initial numbers for my site with the caveat that these results are considered preliminary until the data has been verified.

The scanned paper ballot official counts and our exit poll results are close, with nothing falling outside reasonable statistical bounds on any of the races.

The voting machine counts and our exit poll results are not as close, with a couple of results that bear looking into, but I had three results flagged earlier.  One has already turned out to be a data input error on my part.  (That’s why I want to verify the numbers before publishing).

I will present the exit poll provisional ballot results though.  I’m reasonably confident there are no large errors in my counts and small changes won’t alter these results.

In our exit poll survey, I found that provisional voters were approximately 10% less likely to vote for republican candidates.  I think it is reasonable to take this along with the additional data from the other exit poll locations, as a measure of the effectiveness of Kris Kobach’s efforts to disenfranchise non-republican voters.  I have already contacted the league of women voters to see if this data will be of help with their lawsuit regarding his practices.